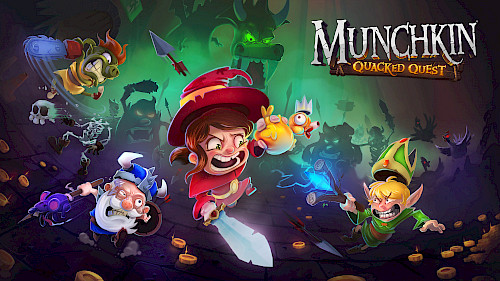 For the first time ever, the Munchkin universe is coming to a gaming console near you! Munchkin: Quacked Quest by Asmodée Digital, based on the game world of Munchkin, is now available on PlayStation 4, Nintendo Switch, Xbox One, and Steam (PC only).

Asmodée Digital is a leader in video-game entertainment inspired by boardgames, and they have done a phenomenal job of bringing the manic humor of Munchkin to life. In this completely new game, players race to level up and betray their friends in a mad dash to kill monsters, grab the loot, and level up. Again. Also, you're collecting ducks, because of course you are.

Each of the four classes (warrior, thief, cleric, and wizard) and four races (orc, elf, dwarf, and halfling) offers unique abilities you can use to gain an advantage over your opponents. But they'll be doing the same to you!