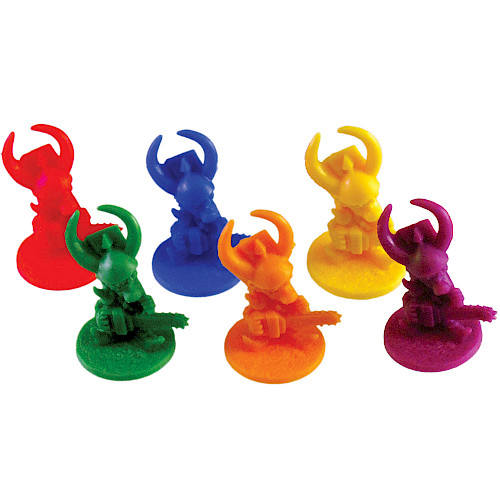 Extra bonus: free Munchkins -- now in the sex of your choice!

That's right, now we've got both Munchkins and Munchkin Babes in six colors -- the four colors found in Munchkin Quest, plus the purple and orange from Munchkin Quest 2 – Looking for Trouble. You can get six Munchkin pawns, like those found in the initial set, or six female Munchkin pawns in the same colors.

The obvious thing to do is to keep the Munchkin pawns around for the day one is lost, or throw the Munchkin Babes into your Munchkin Quest box and use the correct pawn for whatever sex your character happens to be at that moment.

But if you're truly evil – and your friends let you get away with it – you'll show the world just what a munchkin you really are by using these pawns in other games.

Any time you are entitled to go up a level – or when you do something that WOULD earn you a level if you weren't already Level 9 – you may, instead, place a munchkin pawn in front of you. In any combat, you may discard it for a 1d6 bonus. You may only have one in front of you at a time. Unless, of course, you "lose" these rules and tell the other players that you're allowed to have more. Six is a good number.

Because you're a munchkin, you may claim a munchkin advantage for using these pawns in ANY game. For instance:

If you create your own official rules for using the Munchkin pawn in other games, please share your rules with us at the Steve Jackson Games forums.