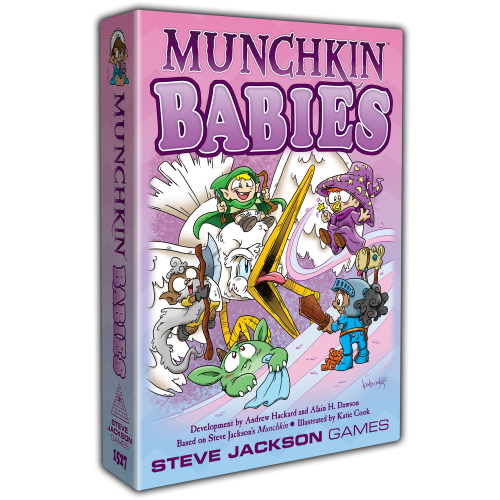 Munchkin Babies delivers 168 cards full of sweet, adorable baby adventurers . . . who are just as good at backstabbing and loot-grabbing as their elders from Munchkin. Play a cute Orcling, Dwarfling, Elfling, or Quarterling (half a Halfling). Go to preschool to learn your Class: Wiz Kid, Ankle Biter, Crumb Snatcher, or Holy Terror, and then arm yourself with the scariest items from the toy box: the Kazoo of Constant Whining, Kid-Safe Stabbinator, Blame-Resistant Pajamas, and of course, the Extremely Pokey Spoon. You must fight fearsome monsters such as the Jealous Kitty, the Hootin' Nanny, the Napmare, and, worst of all, the Pediatrician! Grab their treasure and crawl your way to Level 10!

Playing Babies with Other Munchkin Games

There are a few small differences between Munchkin Babies and other Munchkin sets. If you want to mix your decks, keep these rules in mind.

Class and Race in Munchkin Babies

For game purposes, babies are just younger members of the traditional Munchkin Classes and Races. Baby Classes – Ankle-Biters, Wiz Kids, Crumb Snatchers, and Holy Terrors – correspond to the usual Class types – Warriors, Wizards, Thieves, and Clerics, respectively – and have exactly the same effects and weaknesses. For example, Holy Terrors have the same bonus against Undead as Clerics, Ankle-Biters can Berserk, etc. Baby Races correspond to the usual Race types – Elves, Dwarves, Orcs, or Halflings – and have identical effects and weaknesses. They are the same Races and are affected by the same rules and restrictions. For example, an Elfling may use an Elf-only weapon and vice versa.

When mixing any Munchkin Babies game with Munchkin, if you have a baby Class or Race, and trigger Bad Stuff that includes Death, you instead must discard your hand. If you have no cards in your hand, lose a level. 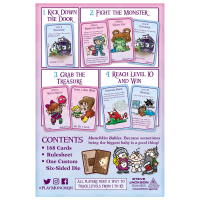 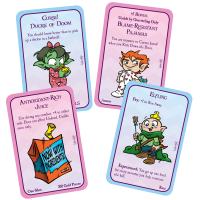 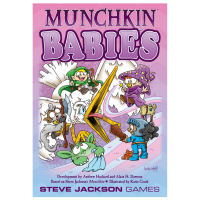