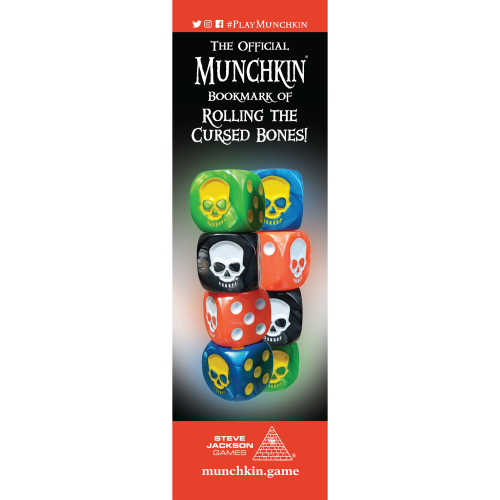 The Official Munchkin Bookmark of Rolling the Cursed Bones!

Designed by Will Schoonover Illustrated by Alex Fernandez

The Official Munchkin Bookmark of Rolling the
Cursed Bones!

You may use this bookmark in any game of Munchkin or its sequels. It may be used at any
time on your turn. You may use only one bookmark (of any kind) per game unless you change
sex. If you change sex, you may use a second bookmark. You may not use more than two in a
game, no matter what.

1. Show everyone the bookmark so they can satisfy themselves that it is what you say it is.

2. Place a set of Skull d6 Dice on this bookmark.

3. You may use this bookmark once in each combat which includes an Undead monster
until there are no more dice on the bookmark. Remove two dice of the same color from
the bookmark and roll them. Add a bonus to the monster side of the combat equal to the
total of all non-skull results. For each skull result you roll, give a card from your hand to
one of the players in the combat.

4. After combat, regardless of who won, any Skull d6 Dice used are removed from the
game.

5. When you remove the last die from this bookmark, give the bookmark to another player
of your choice. They may use it during this game if they have their own Skull d6 Dice
Set.