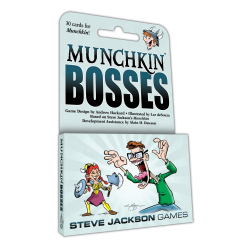 Munchkin Bosses was a long time in the making. Back in early 2018, Munchkin Associate Developer Devin Lewis and the late, great Munchkin Czar Andrew Hackard did a lot of talking about boss monsters. Bosses aren't new to Munchkin; you have to fight a Boss to win in Munchkin Quest, but the Boss is always level 20, so there’s no element of surprise. Andrew and Devin wanted to introduce some randomness (nice to meet you, randomness!).

They kicked around the idea of making a deck full of powerful Boss monsters, but figured players would end up just adding them to their Door deck, and during a game wouldn’t have a choice about when to fight a Boss. Then Andrew and Devin thought of creating a completely separate deck full of Boss-level monster enhancers, and a mechanic to allow bold (reckless) players to take on a Big Bad whenever they felt lucky (desperate).

They quickly realized that a bunch of +10-15 enhancers wasn't going to provide the Boss experience they wanted. If you draw +15 enhancer but then find the Potted Plant, you’re only fighting a Level 16 monster – not really much of a challenge. Devin suggested minimum Levels on each enhancer, so Bosses were guaranteed to be badass. The final cards all have a Level bonus plus a minimum Boss Level. If you find yourself loaded down with bonuses and one-shots, but you're only level 7, you can go for a Boss and win . . . or not. Element of surprise achieved!

Getting Munchkin Bosses from its first draft to a final game took much longer than usual (thanks, Covid). Usually when we have a new Munchkin game ready to try out, SJ Games staff plays it, we play it with fans at conventions, and the designer often plays it with a chosen group of crack gaming experts. When Andrew put Munchkin Bosses into playtest, it was the middle of 2020 and face-to-face playtesting wasn’t an option. We spent time that summer vetting volunteers for remote playtesting: the group leaders had to be responsible, good at writing critical feedback, and well-furnished with Munchkin games, as well as having other players in their bubble and the ability to print a test deck and play at home.

Once we had a solid team of playtesters, we turned them loose on Munchkin Bosses (Munchkin Babies and Munchkin Enhancers went through the same process). This game was tricky to playtest because it isn’t a standard Munchkin expansion. It’s a great tool for spicing up a Munchkin game and rewarding risky (Munchkin-y) behavior, but it needed tweaking to get right, and the playtesters had to get used to the option of fighting Bosses and drawing from a third deck. We allowed for a longer than usual playtest period, and it was time well spent. Below is an example of how playtester comments can help mold and polish cards and mechanics.

Originally, there was no penalty for losing a Boss fight. Several playtesters questioned that rule, because it seemed anticlimactic. Andrew’s first response explained his reasoning:

The intent was to encourage people to go for a Boss win by making failing to win less risky – and also because it's disheartening when you're losing the game, go for a gutsy win attempt, and THEN get hammered by Bad Stuff if you flub the Run Away. One early playtest had a player call for a Boss when he was WAY behind, but happened to have a decent collection of Treasures. He got utterly smoked and then lost even more levels on the Run Away failure. He actually pulled out of the game at that point because he was so frustrated, and I can't honestly blame him.

A few weeks later, he made the decision to change the mechanics so there would be a consequence for the loss, but still maintained the original “don’t screw the underdog” intent:

Changed the "you lost to the Boss" rule – now, you lose a level instead of the printed Bad Stuff UNLESS you are already lowest Level. I think that's a fair compromise between "you should suffer SOME for not killing the Boss" and "it already sucks to be way behind, why make it even worse?" I want players in the back of the pack to feel like the Bosses give them a way to steal a game. Some of you have made that happen and I love it!

For those who like to see the sausage being made, here is one more question and decision from the playtest:

Question: My group was using a lot of cards and Curse! Bad Hare Day (which switches Doors and Treasures for you until the end of your next turn) stopped us. Does that mean you can't go after a Boss because there aren't any monsters in the Treasure deck?

Andrew: Umm . . . that sure seems to be what it says! I really want to say "No, it doesn't work," because I want the Boss mechanic to get tested as much as possible, but that's just too good.

We hope you enjoy adding Bosses to your favorite Munchkin game. Remember, they’re not the boss of you!