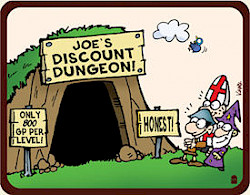 We have published several sets of double-sized "Dungeon" cards for Munchkin: Double Dungeons for classic Munchkin, Crazed Caverns for Munchkin Cthulhu, Hideous Hideouts for Munchkin Zombies, Limited Engagement for Munchkin Shakespeare Deluxe, and the upcoming Odd Ventures for Munchkin Pathfinder. So what's going on with these?

The original suggestion came from Phil. He said "What about NWO cards for Munchkin?" NWO, or "New World Order" cards, came from the INWO game. NWO cards go to the center of the table and affect all the players. They can be a lot of fun, because they let the players change the game rules for everyone!

So, for Munchkin, we made them "dungeons." Each dungeon does something different to the rules. The Dungeon cards make up a separate face-down deck. They never go into players' hands. Some have an effect when they first appear, and others have a continuing effect as long as they stay in play. Some do both. And yes, the party can be in more than one Dungeon at a time!

Phil's original suggestion was to make these a print-and-play download, but the rest of us said "No, this is great – this will make a regular supplement." We were right. You liked Dungeons, you wanted more, and we’ve been happy to comply.

Each set includes 20 of these Dungeons (except for Double Dungeons, which is true to its name with 40); in a normal game, you won't get through them all. Dungeon cards are double-sized for two reasons: to give more space for art and text, and to make sure they don't get mixed up with the regular cards. John Kovalic (and now Lar deSouza, in Odd Ventures) really went to town with the extra space! Some regular Munchkin cards have so much rules text that there's not room for our artists' full craziness to emerge. These bigger cards give them LOTS of room to draw . . . aieeee! 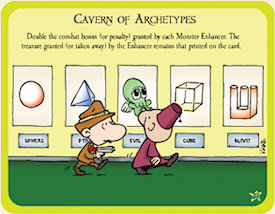 What Makes a Good Dungeon?

Allowing players to be in multiple dungeons at once does lead to timing issues, and in playtest we had some, err, "spirited" discussions of wording.

The original concept included Dungeon cards only. Players wanted to control when they were entering and leaving dungeons – that's where the Portal cards came from . . .

Each set also has 16 "Portals." The Portals are Door cards which let the players add, remove, or change Dungeons, so the special rules keep changing. You don't usually know what new Dungeon you're entering, but sometimes the ability to get OUT of the current Dungeon can be valuable! When you play a Portal, you immediately get to draw a new Door card. This keeps the Portals from clogging up your hand. 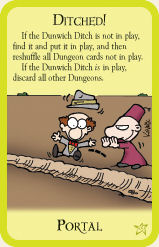 The original Double Dungeons is themed for classic Munchkin, but most of the cards will work with other sets too . . . just flip through them before you start and take out the few that refer to Elves, Dwarves, Races, and/or Undead, as need be. Though you can certainly leave the Dungeon of Elvish Excess in a set with no Elves. It'll have lots of Elves now . . .

Crazed Caverns is, of course, for Munchkin Cthulhu, so some of the cards refer to Cultists and Madness. Hideous Hideouts is crawling with zombies, and so on.

Are we done writing Dungeons? We don't think so! Tell us in the forums what sets still need a Dungeon expansion!