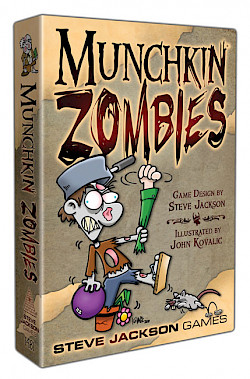 It wasn't going to be Munchkin Zombies.

For the tenth Munchkin game, I was working on something completely different. I'll get back to it in 2013 or so. But that game got completely knocked off the track in July. Phil and I were talking, and he said we should do zombies for Munchkin. I said, "That would be completely awesome," or something equally cogent and analytical. We called Ross, and he said, "Oh, I can sell zombies! LOTS of zombies!" Sometimes, the best marketing research is simple . . .

Too often, we talk our good ideas to death, but this time we just DID IT. I set the other game aside and started writing zombie cards. Our original plan was for the munchkins to be survivors fighting a zombie outbreak. Very early on, though, we decided to let the munchkins BE the zombies. It makes the game rowdier and a lot edgier, and hits the same note as Zombie Dice . . . it's fun to be the zombie! Also sicker.

That makes the monsters various types of ordinary folks, which is a bit weird for Munchkin. On the other hand, the zombies kick down doors and try to eat people, which is exactly right. Still, some of the zombie monster ideas had been very obnoxious, and therefore good, so there are a few "rogue zombies" in the set.

Less than a month later, we had a playtestable version. We unveiled it at the ACD retailer show in August. Reactions were good! One of the players there was Monica Valentinelli, who blogged about it. She called it "disgusting and wrong." She liked it! Woot! 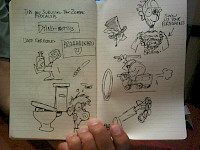 That same weekend, Phil and I sat down at a coffee shop with John Kovalic and babbled about cartoon zombies. His first sketches cracked us up, and they're still on the site:

As playtest went on, we went through various iterations of Race-like things and Class-like things. The first draft had "Races" called Mojo (good enough) and "Classes" called "Zombie Class" (horribly boring.) We tried Mojos and Straaaaaiiins briefly, but that just got more confusing.

Eventually, we settled on Mojos as a class equivalent. The Mojo is the source of the zombie's zombie-ness. The Zombie Mojos are:

Mojo is a brand new trait. So you can combine this with (for instance) Munchkin and have (for instance) a Strong Atomic Zombie Dwarf Thief. And you should. That would be awesome.

In early September we took the game to Seattle for PAX and showed it to a LOT of people (many of whom were wearing Plants vs. Zombies traffic-cone hats). That playtest made lots of people happy . . . but it showed that the game still wasn't quite there. (Much like the designer.)

Shortly after that, Andrew suggested that instead of giving the zombies a race-type attribute, we let them accumulate Powers, as in Super Munchkin.

DUH. That was the right answer. It meant that (for instance) zombies don't have to choose between being strong and fast . . . they can be both! It also let me kill several small balance issues. I immediately started casting about for a good zomboid name for Powers. Czar Andrew said, and I quote, "Why not call them Powers?" That works. So any of the Mojo types can be Strong, Fast, Smart, and/or Rotting! And you can drop in Powers cards from Super Munchkin or Munchkin Bites! and create very, very, VERY powerful Zombies. We think this is a good idea.

A mistake we've made in the past was to leave logo creation until last. It's a lot easier to build ads if you have a logo . . . Alex Fernandez did a great job, and it really set the tone of the game. Look at it. See what's going on here? The type is gradually zombifying . . .

We love burying jokes in the cards. This goes all the way back to Illuminati, but with Munchkin we can use much dumber jokes. And John K always adds some of his own. I'm not going to give them all away here, but . . .

The Office Zombie's nametag says "Hi, I'm Bob," which is a shout out to Jonathan Coulton's "Re: Your Brains." (You will also notice that he has a red stapler and is carrying a TPS report.)

One of the Wishing Rings in this set is the plastic ring from a six-pack. In my original art notes, this was the pull-tab-ring from a beer can. It was pointed out to me that those pull-tabs had been discontinued before half our players had been BORN. Okay, okay, I get it, I'm old . . . (There's a Wishing Ring in Zombies 2 that, unlike the ones in this set, is an actual ring on an actual finger. Which makes it even creepier . . .)

The Antique Vinyl card, of course, is a shout-out to Shaun of the Dead. Blame John K for the album cover!

One of the things that I learned from Zombie Dice is that players really like to say "Braaaaains." So there had to be a Go Up A Level card that requires the player to say "Braaaaaaains!" With feeling!

One thing led to another. What rhymes with "braaaaaains?" Start with a list of rhymes, and look for ways to tie those words to a zombie picture, and find the connection between that image and the way Munchkin plays. It was like doing a puzzle with soft, gooey, brain-flavored pieces. Fun! So, among others, we get:

Traaaaaaaains! The zombie is hit by a train.

Graaaaainnns! The zombie has bitten into a loaf of bread rather than a brain.

Maaaaaaains! The zombie is having a shocking experience. (Our British players will get this one more quickly than most of the Americans.)

It turns out that Andrew is scarily good at rhyming – be glad we spared you some of the horrible jokes his head contaaaaaaaiiiiins.

The other running joke in the set is that the zombies, being mindless, don't deliberately put on armor. So the armor, and the footgear, and the headgear, and some of the weapons are just things that the zombie might have blundered into. Silly things. Shining Porcelain Armor, for instance, was a great chance to let John draw a toilet, which always makes him happy. (Actually, he got to draw two toilets in this set – we'll let you find the other one.) 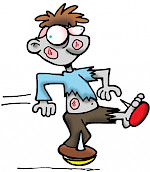 "Thumbtacks" was another bit of accidental gear for the zombies, this time with a real "ouch" factor. Yes, once these were on the zombie's feet, they'd really sort of protect him. But just looking at this image gives me a pang of imagined pain. But it's all right! The zombie is not about pain! He just wants your brain! 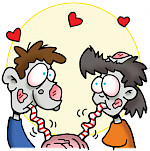 You can't blame any one of us for this. This is what happens when your Munchkin team pools its brains . . . So to speak. I wanted to show two munchkins sharing one brain, to go on a card that lets the helper level up after a combat. Andrew suggested the "noodles" scene from Lady and the Tramp as inspiration. And John drew . . . this. Euggggggh. I love it. 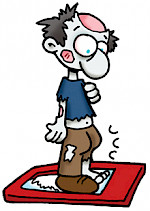 No deeper meaning here. It's a silly, vulgar pun. Now, AFTER I thought of the pun, I thought of the punishment of the fortune-tellers in Dante's Inferno. Their heads are turned backwards, and in a horrible bit of detail, Dante tells us that their tears run down their backs and between their buttocks . . . But I didn't want Dante here. I wanted simple and silly. I got it, but it wasn't easy . . . John sent three versions of this one to see which one best got across the "head turned backward" message.

John had a lot of fun drawing zombies. Enough so that when he was finished with the main game, he was enthusiastic about diving right into the first supplement. But by the time he'd finished that – which worked out to nearly 300 zombie cards – he was ready for a break. So we let him draw Munchkin Jumbo d6 cards for a while . . .

The first supplement, Armed and Dangerous, is at the printer now. It adds another Mojo: Patchwork. A Patchwork Zombie is stitched together from spare parts, like Unity in Skin Horse, or some of the Constructs in Girl Genius.

And we do have another supplement in mind, but not much work has been done on it. We're thinking it will include Dungeon-type cards, and we're thinking 2012.

But stop and ask yourself: Why are we really doing this? Why are zombies so popular right now? Why have we released four zombie games, and why are we thinking about another one? Could it be that on a racial level we know that the true zombie apocalypse is coming, and that it's only a matter of months, at the most, before we're all overrun by mindless, slavering hordes of the hungry undead?