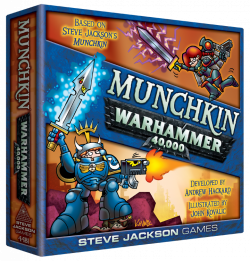 In the first Design Diary, I talked about some of the large-scale challenges in writing a Munchkin adaptation of a game as well known as Warhammer 40,000. In this installment, I'll be talking about creating Munchkin versions of weapons and other gear from Warhammer 40,000.

Fortunately, this is a game all about killing your opponent, as decisively and swiftly as possible, so weapons are not in short supply. In fact, my hardest job was shifting through hundreds of tables listing dozens of possible ways to kill your enemies and figuring out how to write them all in Munchkin terms. 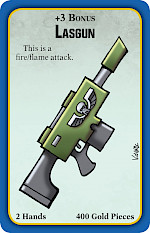 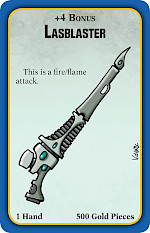 Maybe the best-known basic Warhammer 40,000 weapon is the lasgun, so it was one of the first cards I included in the set. There are other "las-" weapons, however, including the lasblaster, which is explicitly described as a smaller, more potent version of the lasgun. In Munchkin Warhammer 40,000, therefore, the lasgun is a 2 Hands weapon with a +3 bonus, while the lasblaster is a 1 Hand weapon with a +4 bonus. Some playtesters were confused about that, wondering why the lasblaster was clearly superior, but it is true to the setting. 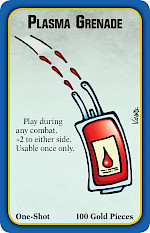 Armor wasn't any problem in Munchkin Warhammer 40,000; there are enough varieties of power armor in use in the game that I could be choosy. I also had plenty of One-Shots to pick from; the variety of grenades, missiles, and other one-use armaments in Warhammer 40,000 is impressive, and I had a good time reading through weapon tables picking out ones that sounded fun both on their own and when turned into Munchkin rules. And we had some fun along the way; check out our version of the plasma grenade!

Vehicles are another important part of Warhammer 40,000 tech, and here I was lucky that I already had Vehicle rules (originally found in Munchkin Impossible and Munchkin Apocalypse) for Munchkin so I could focus on picking a few that really looked cool. Most (but not all!) of the Vehicles in Munchkin Warhammer 40,000 are Big items, as you would expect from things like troop carriers or tanks (yes, the classic Leman Russ appears!) but there are also single-person conveyances that I chose not to make Big because a sufficiently determined thief could walk off with one. An example of this would be the Raven's Fury jetpack – and look at the cool art John drew for us! 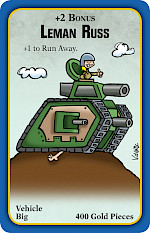 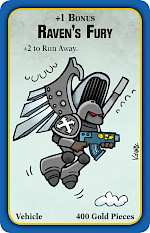 Working on the weapons and loot did present some challenges. I had a rough time finding named helmets to use as Headgear, for instance, although in the end I made it work. Footgear . . . was another story. I found a couple of canonical but possibly obscure references to boots or shoes (shout out to the Catachan Devil Boots!), but mostly here I was on my own. Luckily, the team at Games Workshop was willing to let me have some fun, and I know you'll like what we ended up with in the final game! 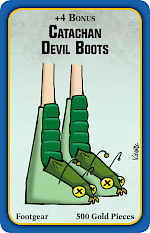 In writing this game, I benefited greatly from in-house Warhammer 40,000 knowledge. Ben Williams is a master miniature painter (you may have seen his work on our recent Ogre Kickstarters) and knows the setting very well. Perhaps his only rival on the team is John Kovalic – I think you'll see how much love John has for Warhammer 40,000 when you get to see all the art he has drawn for this game! I hope you've enjoyed this early look at some cards and a peek behind the screen to take a look at my design process. I'll be talking to you again in a couple of weeks with another look at Munchkin Warhammer 40,000!