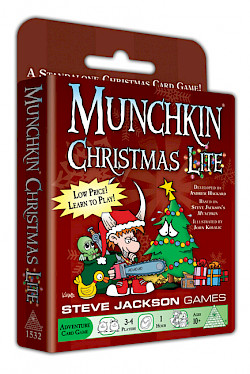 When Phil Reed called me to ask how quickly I could create a holiday-themed 112-card expansion that could also stand on its own as a game, my initial reaction was "I dunno, two or three months, maybe."

He told me I had a week. And that we were selling it for ten bucks. And that the rules had to fit on a single sheet.

And then he told me to get with John to warn him about his deadline. That was a fun call.

In the end, we settled on a hybrid approach: we took some existing cards from the holiday boosters, added some Christmased-up cards from classic Munchkin and a couple of its expansions, and wrote several dozen new holiday cards, and got it done pretty close to our deadline.

Here's how we did it.

The primary design goal of Christmas Lite is to serve as an introduction for new players. Toward that end, and with the rulesheet limitation in mind, we looked at ways to streamline the rules that wouldn't cause problems when new players "graduated" to the full Munchkin experience (meaning, among other things, that we didn't rewrite existing cards, no matter how much we wanted to). After some thought, we identified two rules that could be removed more or less cleanly: Big items and Death. We decided that with the large number of Santa monsters we were going to have in this game, we didn't need Undead. In the interest of streamlining, we took out Super Munchkin and Half-Breed, which pulled another small bit of text out of the rules. We also didn't have any Treasures with limited usability; that's a fun aspect of the original game but it's a complexity that's easy to remove without hurting the basic gameplay.

Settling these questions put some constraints on the design. Without Undead, we took out the Cleric, replacing it with the Bard (we needed help with our caroling). Without Big items, we took out the Dwarf, replacing it with the Orc (and now you know why we needed help with our caroling). Between the "no Undead" and "no Death" restrictions, we lost several monsters we really wanted to keep, but that opened up room for some new monsters. Without limited-usability Treasures or Big items, we had a lot of room for new Treasures as well.

Fortunately, we have a loose-ish framework for writing 112-card expansion sets. I adapted that to the needs of a playable game. That told me roughly how many monsters, Curses, and Treasures of various types I would want.

Armed with this skeleton of a set, I looked over the list of possible cards I'd pulled from existing Munchkin sets. I wanted two copies of the four Classes and three Races; I also nabbed the Naughty and Nice cards from Waiting for Santa and Naughty & Nice (both now available in the Munchkin Holiday Surprise collection). There are certain "basic" cards in almost every Munchkin game, such as Cheat! and Wandering Monster, so I included those. Easy part, done!

Settling the monster list was a challenge. I wanted the list to come close to the Level progression from a usual core Munchkin game, scaled down to fit the smaller size. But some of the monsters I chose didn't fit that model, and I had plenty of holes to fill when I was done. One monster that fit the bill perfectly was the Gazebo, now decked out in its holiday finery.

By comparison, fewer Treasures made the cut; it turns out that many of them had restricted usability, were Big, or just didn't seem particularly thematic. (We also had a LOT of stupid Treasure ideas!) We had a good time Christmasing up the Treasures that did survive, however, including several Go Up a Level cards that could be reworked easily enough. 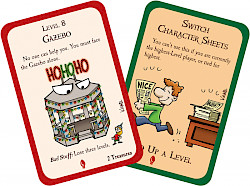 We did have a great deal of fun writing new cards for this game, of course. After five Christmas Munchkin boosters, one might be forgiven for thinking that we had exhausted the possibility for stupid holiday jokes. One would also be so very wrong.

For starters, we needed a new Level 20 "boss monster," the Plutonium Dragon having migrated to more reptile-friendly climes for the winter. While we had some strong contenders, the eventual winter was an unexpected ray of holiday sunshine, the Manta Claus. (Did I mention we have no shame? Because we have no shame.)

Aside: You'll note in the picture that it is a Santa monster. We could have justified making every monster in this set a Santa monster, what with the gay apparel and holiday trimmings, but that would have made for some chaotic combats. Instead, we stuck with monsters that explicitly referred to Santa or were otherwise closely tied to the Yule festivities.

As I mentioned above, we had lots of new Treasure ideas, enough that I had a hard time winnowing down the list to only one example. However, I don't want to show all the cool new stuff here, so I've picked a card that demonstrates how we can take a single phrase and turn it into a Munchkin card: the Jingle Bell Rock. Sometimes being literal is the best choice! 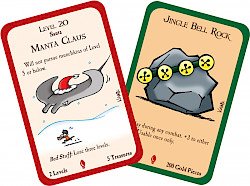 Where Do I Go From Here?

If you're new to Munchkin, and if Christmas Lite is your introduction to the game, welcome! We're glad you've tried us out. There are several ways you can expand your game:

For more information about everything Munchkin, go to munchkin.game. To get a list of currently available Munchkin swag, visit warehouse23.com and click on the Munchkin link in the navbar. And if you have any other questions, come to forums.sjgames.com/munchkin and ask away!