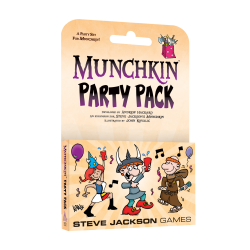 We occasionally get notes from fans asking for support for Munchkin-themed events such as birthdays, graduations, and the occasional wedding. These make us very happy. It feels great to know that people get so much enjoyment from our silly card game that they want to include it in their own celebrations. (I don't think we've been asked for Munchkin gender reveal cards yet, but I'm sure it's just a matter of time . . . especially now that I've mentioned it here.)

Never let it be said that we don't recognize an opportunity when one shows up . . . if people want to throw Munchkin parties, we certainly want to support that! And, obviously, the best way to do that is with more loot! – or, in this case, more Munchkin cards! Enter the Munchkin Party Pack. 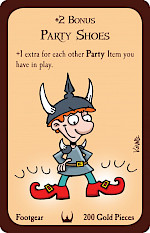 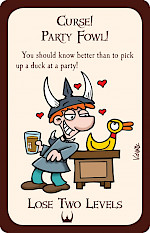 The Party Pack has 30 cards. We posted the entire card list, with no details, in the Daily Illuminator. But now it's time to show you a few of those cards for real! Half of these are a 15-card mini-expansion designed to shuffle right into your favorite Munchkin game. This expansion includes awesome Treasures such as the Party Dress, Party Hat, and Party Shoes; the horrid Curse, Party Fowl!; and vile monsters such as the Death of the Party and the Party Pooper. You can add a little party magic to every Munchkin set with this expansion! 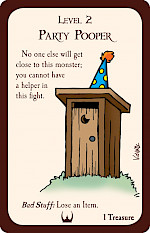 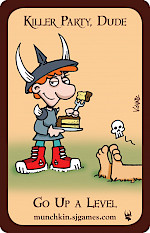 The other 15 cards are designed for you to give to your guests: there are five cards with three copies of each. Everyone likes getting Munchkin cards as party favors, right? With this new set, all your guests will be saying Killer Party, Dude.

With illustrations by the ultimate party animal, John Kovalic (as long as that animal is a muskrat), this is an expansion that should please every Munchkin fan. And if you're throwing a BIG party? Obviously, you need to buy more copies! – at $9.95 apiece, that's not going to break any party budget. Make Munchkin Party Pack a part of your party planning every time!