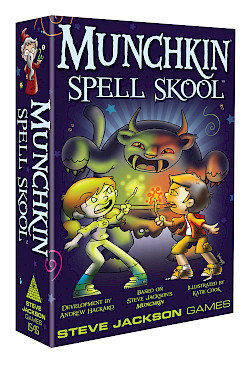 It seemed like the easiest thing in the world when Phil told me he had sold another exclusive Munchkin game to a major retailer: "Andrew, we need a game about kids at a wizards' school." After all, there is no shortage of source material.

Parody Only Gets You So Far

When Steve took a look at my first draft, he made a suggestion that changed the course of the game: Make the characters elementary age, not teenagers. Naturally, being stubborn and not always as bright as I think I am, I resisted, longer than I should have. Once I got over my ego, however, I realized that making the characters younger gave me a different well of jokes to draw on and allowed my parody to be a bit sharper. The idea of switching from divinations and alchemy to finger painting and basic arithmetic gave me the shift in perspective I needed to find the heart of this set. 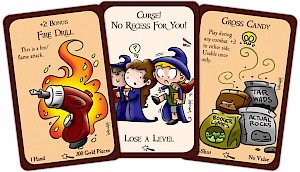 Lowering the ages of the munchkins opened up the possibilities of cards such as Curse! No Recess For You! and Gross Candy that might not be quite so appropriate for older characters. (Fire Drill works fine for all ages, happily!)

I decided that a focus of this game would be different types of wands, since presumably young wizards would have to start training early. Wands in this game range from the Training Wand all the way up to the enormous Two-Handed Wand, and there are several other cards that interact with wands as well. 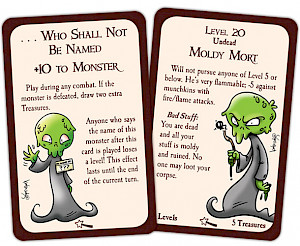 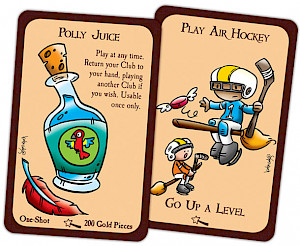 I didn't have to burn my notes and start from Square One, fortunately; a lot of the cards still worked as parody even with younger heroes. Treasures such as Polly Juice and Play Air Hockey worked fine, and a lot of monsters didn't require any changes. I could keep my beloved Moldy Mort and the associated monster enhancer, . . . Who Shall Not Be Named.

I even had time for a few jokes that weren't specifically about the Spell Skool. For instance, one of my favorite monsters in this set is the Level 2 Rapscallions. We aren't posting a picture of that card because I'm curious how close people's imaginations get before they see the art. (Their Bad Stuff is on theme, however: "Magical wedgie. Lose a level.")

Since this is a smaller set (112 cards), I was pretty sure I wouldn't have room for a lot of Classes and Races or similar analogs. After some brief thought, I dumped Races entirely. Originally, Steve and I had talked about using the classic Munchkin Classes (Cleric, Thief, Warrior, Wizard), but they didn't really fit the theme, particularly with the focus shifting to younger children as the main characters in the game.

Finally, I realized I had the solution in front of me the whole time. I took the card Chess Club out of the Treasure deck and decided the Classes would be the various clubs the students could join: Chess Club, Forbidden Magic Club, Potion Club, and Sports Club. There are no Super Munchkin cards in this set, for the sake of simplicity, so apparently my magical schoolhouse also has cliques. Well, nothing's perfect.

What? No Art Club?

Of course, a vital component of every Munchkin game is the art on the cards, and Spell Skool is no different. Once we recognized that we were writing a game about little kids, we knew that we needed a certain aesthetic to match the tone. We decided to approach our friend Katie Cook; her work on similar characters in the Munchkin Oz Guest Artist Edition was exactly the approach we wanted. Fortunately, Katie said yes! The cards look fantastic and it really feels like a game about elementary-aged kids. Who are also wizards.

The Name of the Game

Unusually for a Munchkin set, the name was one of the last things we settled on. Our working title was Wizard School – unimaginative but clear. That lasted until we learned that DFTBA Games was running a Kickstarter for a game called, yes, Wizard School. I briefly championed Arcane Academy, until I learned that IDW was publishing a game with that title . . . a game designed by Munchkin Collectible Card Game writers Eric Lang and Kevin Wilson, to boot. We certainly didn't need that brand confusion!

In the end, Steve's suggestion of Spell Skool won the day (obviously), but not until we had a conversation about that second word. I really wanted it to say "School," but Steve made a good arguments for his position: It was much less likely to get swiped for another game's title before we got to market. The title has grown on me, and looking at the final box design, I have to concede that Spell School wouldn't have been quite so balanced and would have made Katie's fantastic cover art look off-center. Steve knows what he's doing!

The Cure for What Ails You

I owe final thanks to our partners at Walgreens, who were enthusiastic about another Munchkin set to follow up Grimm Tidings and jumped at Spell Skool when Phil pitched it to them last year. It has been great to see Munchkin in new places, and I hope all of our North American Munchkin fans will visit Walgreens soon to pick up our latest game. Be sure to come to the forums when you do and let us know what you think!