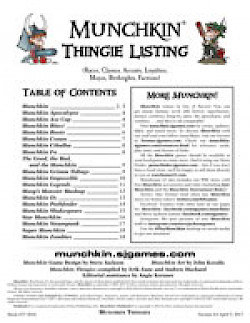 We have a free download on Warehouse 23 called Munchkin Thingies that lists the Classes, Races, etc. found in every Steve Jackson Games Munchkin game or expansion.

Or that's the theory.

Turns out, we've let it fall a bit out of date. So we just uploaded a new version that includes content from Munchkin Grimm Tidings, Moop's Monster Mashup, Munchkin Oz, and MunchkinSteampunk . . . and we included a preview of the new Class and Faction in Munchkin Pathfinder 2! It even covers Munchkin Shakespeare Deluxe!

Reminder: BackerKit Closes In One Week