There are lots and lots of Munchkin themes to choose from. Here are a few that just might tickle your funny bone. Each is a stand-alone set with 168 cards, and each can be played by itself or combined with the original Munchkin. 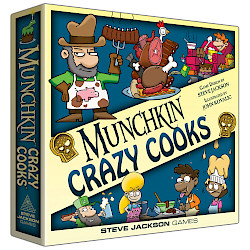 Munchkin Crazy Cooks
Adventure in the only place with more backstabbing and treachery than the dungeon: the kitchen! Fight the Mystery Meat with the Laser Ice Cream Scoop and the Fatal Ladle &ndash; but watch out for the Awful Waffles and the Dreaded Veal Cutlet! 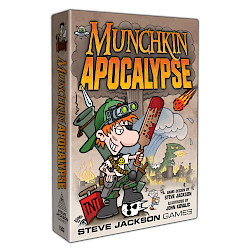 Munchkin Apocalypse
You’re a rugged survivor in a world full of people – and things – that want to kill you and take your stuff. So do it to them first! Equip yourself with the Collapsible Toothbrush, the Paintball Gun, the Infrared Goggles, and of course the Solar-Powered Radio with Flashlight and Duck Call. Battle the Pod People and the Feral Poodles. This set introduces four new classes and a new, yet eerily familiar, card type: Disasters! 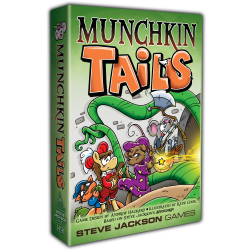 Munchkin Tails
Munchkin has gone to the dogs . . . and the foxes, mice, and ponies! Cute animals . . . what IS it about them? Now you can bring them into the dungeon, fighting the Human Rights Activist, the Robot Vacuum, and even the feared Animal Control Enforcer. Use a Tail Flail or a Cone of Defiance and reach Level 10! 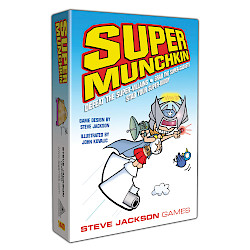 Super Munchkin
Look! Up in the sky! Ha ha, made you look!

Be a Mutant, an Exotic, a Mystic, or a Techno. Battle dastardly masterminds, devastating monsters, and invading aliens dimension – from the wimpy Bucketman all the way up to Big Ol' Planet Eater Guy himself– and take their stuff! With the Electro-Mento-Hat, the Telezapinator, and the (jet-powered) Pogo Stick, no foe can stand before you! 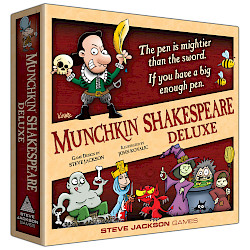 Munchkin Shakespeare
Take in hand thy blade! Battle every enemy thou meet’st! Foully cozen thine companions, and make off with their treasure! Break the Fourth Wall and battle Lady Macbeth with Slings, Arrows, and a Bare Bodkin! All the betrayal, slaying, and wordplay of any good Munchkin game – and any good Shakespearean play. The perfect gift for any fan of the Bard! 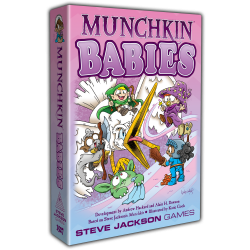 Munchkin Babies
The munchkins are little babies. Cute little babies. Cute and totally destructive little babies. Awww . . . You'll play an Orcling, Dwarfling, Elfling, or Quarterling (half a Halfling), armed with the scariest items from the toy box: the Kazoo of Constant Whining, Blame-Resistant Pajamas, and of course, the Extremely Pokey Spoon. Fight fearsome monsters such as the Jealous Kitty, the Hootin' Nanny, the Napmare, and, worst of all, the Pediatrician!