The original flavor! Fight silly monsters, steal silly treasures! Backstab your silly friends and laugh all the way to Level 10! 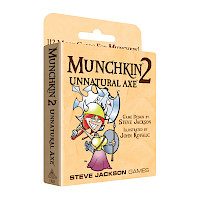 Munchkin 2 – Unnatural Axe
112 more cards for the game of killing monsters and taking their stuff. Play a new race: Orcs! Face foes like the Hydrant and the Tentacle Demon. Equip yourself with dread armor like the Spiked Codpiece. Recruit allies like the Shoulder Dragon. Wield mighty weapons like Druid Fluid, the Slug Thrower and, of course, the terrifying Unnatural Axe! 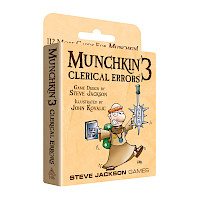 Munchkin 3 – Clerical Errors
Another 112 cards . . . Play a new Race: Gnomes! Try on the Bard Class. Face the Tequila Mockingbird, the Bad Ass, and the dreaded Auntie Paladin! Get amazing items like the Chainmail Bikini and the Stab-A-Matic! 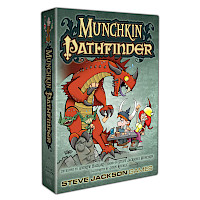 Munchkin Pathfinder
168 more cards for killing monsters, stealing treasure, and backstabbing your fellow players. Based on the hit RPG, Munchkin Pathfinder brings you entirely too many Goblins – but you know what to do. Kill them and take their stuff! 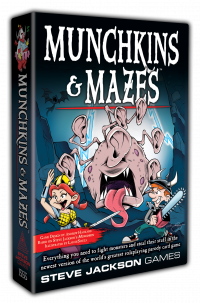 Munchkins & Mazes
A complete stand-alone game that can also combine with the original Munchkin! 168 cards . . . approximately a million giggles. Fight Napoleon Bonyparts and the dimwitted Dorcus with the Pumpkin Spice Potion (euw), the Meat Shield (euuuwww), and the Weed Whacker of Wanton Wickedness (really!) 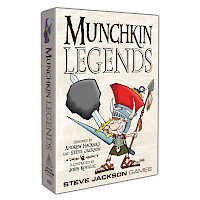 Munchkin Legends
Prepare to fight the creatures of legend . . . and take their stuff! In Munchkin Legends, you'll face mythical monsters and collect legendary treasures. Challenge the Boogie Man to a dance-off and cheat by wearing Achilles' Heels. Hide from the spells of the Wicked Witch of the Midwest in your Burmuda Shorts of Invulnerability. And if you think you're up to it . . . release the Kraken! 168 cards, a gameboard, and character standies.