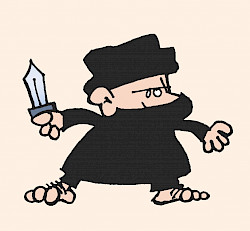 Hello, and welcome to our first Munchkin Spotlight article!

This series will cover all  things Munchkin: specific classes, overall mechanics, individual cards, and even entire genres. We’ll start today with one of the most contentious classes in all of Munchkin: the not-so-humble Thief.

One of the original four Classes of Munchkin, the Thief provided the “stab your buddy” from the tagline! As Munchkin was originally a parody of the fantasy pen-and-paper roleplaying game genre, the Thief fills the sneaky-stabby role that we all love to hate.

The Backstab skill lets you discard a card to give a player -2 to their combat strength until the end of the turn. Since it can only be done once per player involved in combat, it is a -2 or -4 if there’s a helper. This isn’t a ton, but it’s very satisfying to take a narrow victory and turn it into a defeat with a well-timed Backstab.

The second ability, Theft, is the much more controversial of the two. Using Theft, the Thief may attempt to steal a small Item from another player. First they discard a card, then roll a d6; on a 4 or better they successfully take the Item in question. On a 3 or less, the Thief loses a level. Yikes!

There are several arguments that tend to occur around this ability.

What is a small Item?
Can I steal when I’m Level 1?
Does Super Munchkin mean I can steal without penalty?

To start, a small Item is any Item that isn’t labeled Big. An Item is a Treasure card that has a Gold Piece Value or the words No Value.

You can use Theft when you are at Level 1. Since you can’t go below Level 1, you have nothing to lose. As long as you have cards to discard, you may attempt to steal whatever you’d like. The cards you discard can be things you already have in play, including things you may have just successfully stolen. Doing  this will NOT make you any friends, however.

And finally, no. The Super Munchkin card does not mean you can ignore the level loss from failing to steal. The disadvantages that Super Munchkin covers are from a monster getting a bonus against a certain Race, Class, Mojo, etc . . .

Overall the Thief is a fun class to play, even if all of your friends will be keeping a very close eye on you while you are one.