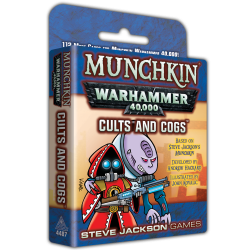 In case you missed it, we released our third Munchkin Warhammer 40,000 expansion last month: Cults and Cogs! Use this with just the original game for an extra weird burst of antimedical mayhem (too soon?) from the Genestealer Cults and help from the team that draws a straight light between their weapons and your demize, Adeptus Mechanicus. Or use this with the two existing expansions, Faith and Firepower and Savagery and Sorcery, for a truly epic Munchkin Warhammer 40,000 brawl with over 500 cards combined in the two decks!

If you're also a fan of Munchkin Warhammer Age of Sigmar, don't forget that we'll be releasing another expansion for that game later this year, Guts and Gory! Just the name makes you want it, right? (If not, you may already be infested . . . OK, that was definitely too soon.)