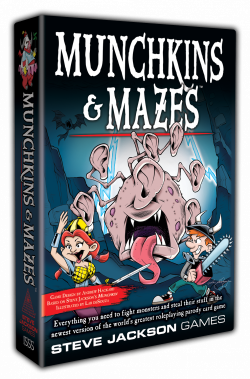 I first played Dungeons & Dragons in late 1980 or early 1981, when our babysitter brought the game over because he thought I might enjoy it. He then let me build a first level magic-user named Borneo, who was armed with a single dagger and a detect magic spell, and sent me into a cave where I promptly walked straight into a gelatinous cube. Good times.

My next character was a fighter. I had learned. I played for several years with my best friend, Mike, who taught me what being a real munchkin was all about, before school and the usual challenges of adolesence put the game on permanent hiatus. We had a great time, abused or ignored the rules we didn't like (seriously, WHAT was up with first edition AD&D psionics?), and killed many long hours -- when we weren't playing the game, we were talking about it. My fighter leveled up quickly (because we were munchkins), built a giant castle (munchkins), and found himself a beautiful elven wife who was an equally powerful magic-user and had as her main weapon . . . a dagger.

I bring this up for two reasons. One, I wanted to lay out my bona fides for those of you who might question my qualifications to write a Munchkin set poking loving fun at the OG roleplaying game. And two, to show that D&D had this coming.

The basic idea for Munchkins & Mazes was simple: "Let's have some gentle, loving fun at Fifth Edition's expense. We should definitely include some jokes about what's been happening with gaming online in the past couple of years. And let's go meta and have some jokes about this new edition of Munchkin, which this game absolutely is not."

Maybe that's not so simple, now that I look at it.

Having some fun with Dungeons & Dragons was the easy part. We love the Fifth Edition of the game and picking some classic monsters to Munchkin-ize was easy. (You'd better believe we got the flumph in there!) With over 45 years of history to draw from, I was able to include references from the oldest sets all the way up to the present. Most of our favorite game worlds are included in one form or another (the Gray Hawk is a particular favorite) and we also included some other fun things from the olden days, such as Thwacko! (Kids, ask your parents. And be ready for a math lesson.) We didn't neglect newer editions, though, with cards like the Thiefling and Dragonbjord that should be familiar to people who started playing in this century.

Speaking of things that are new this century . . .

I probably don't need to tell you that roleplaying communities online and actual livestreamed gaming has become hugely influential over the past decade or so. I also probably don't need to tell you that the online world was a very attractive target for Munchkins & Mazes as a result. Popular groups such as Critical Role and Acquisitionis Inc. have brought roleplaying streams into the public consciousness, dispelling (mostly) the image of a bunch of people crammed into a poorly ventilated basement, guzzling Cheetos and Mountain Dew. We're happy to include them and other media groups in our game. (There's a reason that Orpheus is Undead in this set . . .)

We also included a few cards relating to other aspects of gaming in the age of social media and widely shared opinions. We'll let you discover those on your own.

Second Edition, Same As the First

This is not a new edition of Munchkin. We want to be very clear about that.

However, that doesn't stop us from having some fun with the idea that it could have been. We tweaked some classic cards, such as giving all Class and Race abilities names, many for the first time. We made enhanced versions of some original monsters, such as the Dire Gazebo and the 3,873 Orcs. We souped up some fan-favorite Treasure, including the Twelve-Food Pole and Two Rats on a Stick. And we had a fair bit of run at our own expense along the way – just wait until you see The Munchkin® Brand!

I want to give a big THANK YOU! to Lar deSouza, who did the art for this set and absolutely nailed it. A lot of artists would have run screaming at an art specs that said, essentially, "I want a D&D beholder but with ears instead of eyes," and Lar was more than equal to the challenge . . . even when I made him do it three times, including on one of the stupidest Go Up a Level cards I have ever written. And that's just one of the brain-melting pieces of art we inflicted on Lar, and vice versa. I love the look of this game!

Ultimately, I have a lot of fun answering the question, "If I were writing Munchkin today, what would it look like?" This isn't exactly that set – we were writing a new game, not rewriting an old one – but that question was on my mind as I was making design choices and looking at rules to keep, discard, or revise. Hopefully, the result is a Munchkin game that has a fair number of easter eggs for long-time fans of Munchkin and roleplaying games but is fun for new players as well.