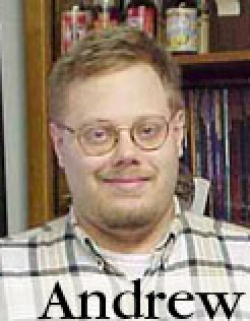 Twenty years ago this week, I started working at Steve Jackson Games. (This is going to be a bit indulgent, but we're all friends here, right? Also, look at that cute baby in the photo!)

The company has changed a lot in that time. When I started in April 2000, Munchkin wasn't even an idea. GURPS was far and away our strongest seller, with other games like In Nomine, Chez Geek, and Illuminati showing up on the schedule every couple of months.

Back then, we had a printed four-month schedule with one new release a month – two, if we were really feeling ambitious. Our good printer was affectionally named Big Berthy and could handle large print jobs at a blistering 10 pages or so a minute. Single sided. No color. When we had to set files to a printer, or make internal archive copies, we burned CD-ROMs, often taking three or more for an average book. The rare times when we had to upload files, we had to warn the rest of the office that we'd be eating up a lot of the ISDN bandwidth – the day we got a share of a T1 was a very happy day at the office.

The building we were in when I started had "charm" – meaning the roof leaked, and there were cracks in the walls that the wind could rush through, and the driveway and parking lot were paved with gravel and dirt. At least one bathroom had wolf spiders. We did all of our own warehousing and much of our inventory was stored in cargo containers out behind the office, meaning our warehouse crew had to trudge up and down a shallow hill several times a day, no matter the weather. Yes, of course there were snakes. (Note to those wanting to make a pilgrimage: you're too late. We moved out of that shack to our current location almost 15 years ago, and the old building was razed so that a condo developer could pave a rear driveway out of his property.)

I got the best on-the-job training I could have asked for, working directly with Steve and Ross on marketing and incidentally helping with some editorial projects along the way. A few months into my employment, we mutually decided that marketing wasn't my strong suit (it still isn't) but that I might someday learn to be a good editor, so I spent the next four years as an editor, line editor, and eventually managing editor, supervising the team hard at work developing GURPS Fourth Edition and doing the main copy edit on the two-volume Basic Set, a project that took me several hard months. I also occasionally helping with testing and editing the first few releases for a silly little card game called Munchkin. In 2004, I left to pursue other opportunities, but I kept working for SJ Games as a freelance editor and a frequent playtester, watching as Munchkin turned from a silly little card game into a silly juggernaut. In 2009, when I was ready to come back, Steve and Phil were gracious enough to allow me to return and trusting enough to put Munchkin in my hands, and it has been a wild ride.

I said above that a lot has changed. Over those 20 years, I have had the good fortune to work with a lot of people (it may be over 100), many of whom I still count as friends . . . and some of whom are no longer with us and sorely missed. I've had the opportunity to travel to several countries and meet fans at dozens of conventions and other events. Steve and I flew to Los Angeles for the first two episodes of Wil Wheaton's TableTop ever shot, an experience I will never forget.

I've written several thousand Munchkin cards and, even after 11 years, I still manage to find jokes that are so obvious once I think of them that I can't believe we've overlooked them until now. I have gotten to work with, and become friends with, several talented people who have helped write and illustrate Munchkin games. I owe special thanks to John Kovalic and to Steve, for bringing me in at the start and bringing me back in when we both needed a change. It's the best job I could have hoped for and I never lose sight of that fact, not even when I'm up against a deadline and the blood is beading on my forehead. (There is always another deadline.)

I don't know what the next 20 years will hold, but as long as Munchkin keeps selling, I'll be proud to be a part of it and I hope you'll be there with me. Thanks so much for your support and your kindness.