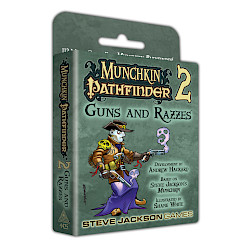 We did not expect it to sell out in just a few months. That was gratifying . . . and also a bit frustrating, as we ended up missing out on some sales.

It's taken a few months, but we've started shipping a reprint of Guns and Razzes, so everyone who missed it the first time around has another chance. And if you haven't tried Munchkin Pathfinder at all yet, in June we'll have a new printing of Munchkin Pathfinder Deluxe, including 12 new cards based on the iconic heroes from the Pathfinder Playtest book! (Don't worry, existing Munchkin Pathfinder owners . . . we're going to make some copies of those cards available separately, too. Watch this space!)

It's an exciting time to be a Munchkin Pathfinder fan!