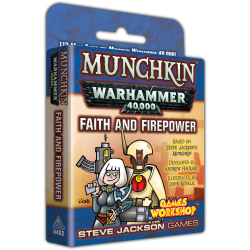 When we first discussed Munchkin Warhammer 40,000 with Games Workshop, we all knew we wanted an expansion shortly after the core game. There’s so much fun, gameable content in the Warhammer 40,000 universe that a single Munchkin game can’t possibly contain it!

Even before we announced Munchkin Warhammer 40,000 at Gen Con, I was working on the cards for the expansion set Faith and Firepower. I knew we wanted to add a couple of Armies to the six in the core game and I knew we wanted more Chaos monsters and lots more cool Treasures. What I didn’t know was how well this new content would mesh with the cards from the core game.

Enter the Play– Oh, You Already Said That

The critical thing when playtesting any game is to lay out the expectations for your testers, to tell them what sort of feedback you are looking for. When you’re testing an expansion, particularly an expansion for a game that itself hasn’t been published yet, there’s the added complexity of making sure the players are testing the new content and comparing it to the older cards. There’s a difference between “This whole game feels overpowered,” which is a matter of taste, and “This expansion feels way over/underpowered compared to the base game,” which is actually a problem unless your goal is to hit the accelerator, or the brake. Setting expectations – in this case, “please don’t comment on the core game cards unless you see an actual error” – allows you to filter the comments to what you’re actually trying to test.

We have three main venues for playtesting:

Since Faith and Firepower has two new Armies, that’s what I asked our first playtesters to focus on . . . and they sure did! It’s going to take some further tests, but I think one of the Armies is a bit too strong and the other – which is the one that Steve and I both thought might be over the top – may need a little shoring up. On the other hand, it’s also possible that this group got a weird draw and these new Armies are balanced just fine. We’ll know more once we have some more tests and can compare the comments. 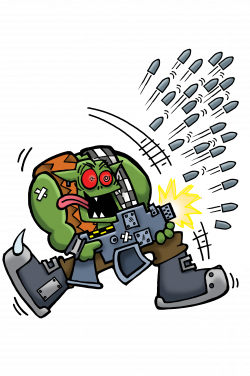 The other things we’re looking for in our playtests are, “Do the cards feel like Warhammer 40,000?” and “Do the cards feel like Munchkin?” This is a licensed game and we want to be sure to honor the Warhammer 40,000 game and its legions of players, even while we’re sharing a knowing laugh with them. So far, we seem to be on track with that goal. As far as feeling like Munchkin goes, all I can tell you is that my playtesters are backstabbing each other and laughing at the cards and doing all the others things I love seeing in Munchkin games – so I think we’re good there, too.

Now I just have to sand off all the rough edges and run it through the playtesting gauntlet again. And again. And . . . you get the picture.