Design Diary - A Peek Inside Munchkin Warhammer 40,000: Savagery and Sorcery 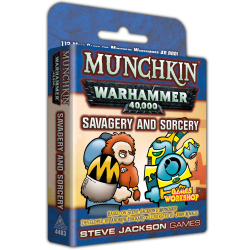 Some ideas are hard. Sustainable, affordable fusion power is hard. Peace between historically opposed cultures is hard. Making a freshness seal that peels off cleanly and doesn't leave little bits of paper and foil stuck to the rim of the jar is hard. (Or maybe that last one is just me.)

Luckily for me, ideas don't have to be hard. For instance, when I told Michael Knight at Games Workshop that I wanted to use the Space Wolves as one of the Armies in the second Munchkin Warhammer 40,000 expansion, he said, "And the other one has to be Thousand Sons! That's a classic pairing in Warhammer 40,000 and fans will be super excited to see it in Munchkin!"

Now, it is possible that I may have had something else in mind, but when our licensor tells me, "This is what you should do!" with active enthusiasm, I listen . . . because if I do that, then it's more likely that getting the expansion designed and approved will be easy. There aren't enough easy solutions in the world and I'm not going to spurn one when it drops in my lap.

Mike was right. I found all kinds of good info in the Space Wolves and Thousand Sons Codexes for Warhammer 40,000 8th Edition. The conflict between these two forces is in many ways a microcosm of the entire Imperium-Chaos battle at the heart of Warhammer 40,000 and I used a lot of that information as I wrote this expansion. I also did some digging on the Internet, which led to several card ideas I wouldn't have come to on my own (a monster named Space Doggy, for instance). As always, John Kovalic was an invaluable resource, and his art for this expansion is coming in this month. I am usually the second person in the company to see it – Shelli Galey, our art director, is the lucky first – and I try very hard to stop myself from grabbing employees as they wander by and showing them whatever new Kovalic piece I'm looking at right then. Sometimes I succeed.

Right now, we're still playtesting this expansion (if you're in or around Austin, be sure to check out our Facebook group for playtest announcements!) but I hope to have some finished art and even cards to show you soon. Watch for more news soon!