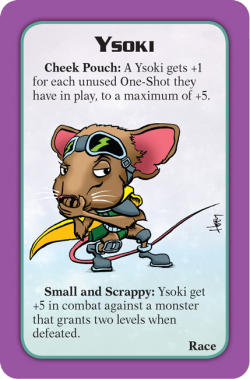 I have some sad news. This is the last post in this series previewing the Classes and Races of Munchkin Starfinder. But I saved my favorite for the end: the adorable little rat-race called the Ysoki.

These little guys are able to stuff small objects into their cheeks for later use and have a significant advantage against larger foes who underestimate their fighting prowess. In the Starfinder Roleplaying Game, many Ysoki are viral media stars, and you can see why . . . they're so CUTE! (If you want to get close up with this little furball, click the card to make him bigger.)

We don't have any more Classes and Races to preview, but don't think we're done talking about Munchkin Starfinder! We'll have plenty to say about this new game in the weeks and months to come. Make sure to bookmark Munchkin News and check in every Monday for the latest news about all our new and upcoming Munchkin games!