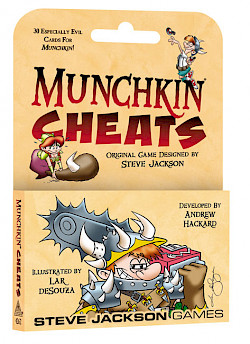 When we first published Munchkin, and for the first few years of its existence, the rules included a clause that was intended as a joke: "unless you have a card that lets you cheat or the other players don't catch you."

Those last few words were, perhaps, ill-advised. Many people took that clause as license to try to get away with all kinds of outlandish nonsense. When we revised the rules, we edited out the bit about the other players catching you, and most people understood that we had never meant it seriously. There were a few, however, who held on, pointing out that our marketing still talked about how much fun it is to cheat your friends.

"It totally is," we replied. "That's why we have a card called Cheat!. We like cheating as long as you're doing it within the rules." We created an entire expansion called Cheat With Both Hands, after all.

This had two positive effects. The people who were really dedicated to being cheating jerks (in the non-Munchkin sense) got annoyed and wandered away to get themselves banned from more game stores, and the people we're willing to invite back to our games laughed and asked when we would write more Cheat-style cards.

Your wish is our (eventual) command!

Our first thought was to print a bunch more Cheat! cards with various backs that could be added to existing decks. Product designed, problem solved, on to the next challenge!

After a bit of thought, though, we decided that this was lazy. Worse, it was boring.

Back to square one we went, this time with a new mission: to write a bunch of different, new Cheat cards. We put in a few copies of cards we already had (three out of 30) but most of the set was devoted to new Cheats, monsters that interacted with Cheats, and of course a Curse that wrecks your day if you're heavy on Cheat cards. Without spoiling too many surprises, here are a few cards from the set that you haven't seen before. 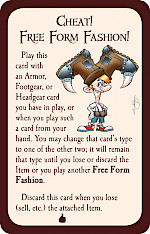 Most of the new Cheat cards are limited somehow – either they are only usable once or they're only usable in certain ways. A good example is Free Form Fashion, which changes one type of worn Item into a different type. You still have to have that slot free to use it, but if you really want to wear your Flaming Armor as a hat or your Boots of Butt-Kicking as armor, now you can. Another is Quick Cheat; it gives you the benefits of one of your unequipped Items for a single combat.

Other new Cheat cards play with other game rules. Time Out, for instance, suspends a combat to give you a chance to do things that you can't normally do during a combat, such as equip new Items, and it forces everyone else to wait until you've finished before continuing. My Turn allows you to do things on another player's turn that are normally restricted to your own, such as sell Items for a level or play a different Class or Race. (I saw a game won with this card; a player unwisely accepted the help of a Level 9 Dwarf. The Dwarf promptly ditched his Dwarf card and used My Turn to play an Elf card instead, securing the win in a way no one saw coming.) 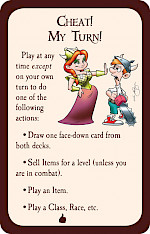 Remember when I said that most of the new Cheat cards are limited? One . . . isn't. It's called Blatantly Cheat, and it is well named indeed. This one may be my favorite new card in the game.

Six of the cards in this set aren't Cheats at all. Two of them are Curses – you should avoid being the victim of those if at all possible. Three of them are monsters, all of which deal with Cheats in some manner. And one of them is a monster enhancer called Lawful Cranky; I'll let you speculate about what that one does. 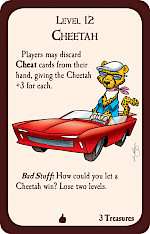 Using Cheats in Your Game

If you sleeve your cards (we recommend buying packs of Munchkin Doors & Treasures Sleeves), or you aren't bothering by having different card backs, you can use Cheats in any Munchkin game - the cards in Cheats are designed to work with all Munchkin sets.

In a game with just a single set (especially one of those smaller ones), you may find that the Cheats cards overwhelm everything else. We've included rules about trimming the set for those occasions. Of course, if you like chaos, we totally support you using all the cards!

This expansion can blow the dust off a Munchkin game that's starting to get a little predictable. A game in which everyone is rocking two or three Cheats, or just has the potential to play that many out of their hand, is a game where everyone is on their toes and fortunes can change faster than the breezes shift direction. We hope you enjoy this expansion, and we know y'all will head over to the forums to give us your opinion once you've tried it out!