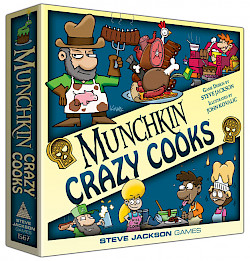 Food is vital to our lives. Oh, so very vital. Bring me some food now. Wait, what was I supposed to be writing about? Well, it can wait till after lunch.

Oh, yes. Food in Munchkin. It is just barely possible that Munchkin didn't have enough silly food jokes. This terrible omission has now been fixed. Food turns out to be a very productive subject for really, really silly jokes. I have no idea whether Crazy Cooks will become a popular gift for cooking enthusiasts, or whether it will remain simply a nutso Munchkin variant, but I'm happy with it. Especially since, as it turns out, it will be released in a Deluxe version with a gameboard.

In my mind, I see the French Chef as an elf, the Short Order Cook as a grumpy Halfling, the Science Chef as a mad-science human, and the BBQ Boss as a dwarf in a checked shirt, but that's just me. You can be an elf Short Order Cook if you want. Tallest short order cook in history . . .

Crazy Cooks includes a new mechanic, not specifically for winning, but for leveling up. There are four types of food token: meat, veggie, drink, and dessert. When you have one of each type, you immediately trade the four in for a level, and – since tokens are gained primarily through combat – this can be the winning level. So eat your balanced meals! 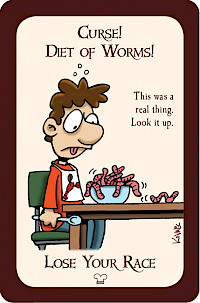 The tokens are also tradable, so they give players another dimension for deal-making. I like this. (I would never tell anybody that they are playing Munchkin wrong, but . . . if you start off stabbing everyone when you're still at Level 1, you're playing it wrong. Help out, make deals, establish an atmosphere of cooperation and trust . . . then stab people. Trust me, this works out better.) 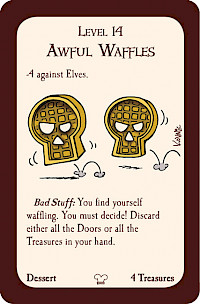 Some of my favorite cards:

There's also a Frankenfood card, calling back to a card in Illuminati: New World Order! 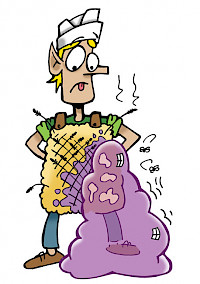 Illustrations are by the Great Master himself, John Kovalic. Here are a few of my favorite images:

As your bonus for reading all the way to the end, here's a finely crafted link to a webcomic whose creators were obviously thinking along exactly the same lines: http://www.uptofourplayers.com/comic/38-mastercheffing/