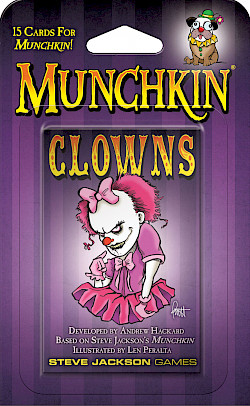 Want to know what was going through my demented brain as I worked on the latest Munchkin mini-expansion, Munchkin Clowns?

OK, you asked for it. Go read my Munchkin Clowns Designer's Notes, below.

If you didn't check out today's Daily Illuminator, you should do that – it has a Munchkin rule for use today only! Plus, Warehouse 23 has a special Munchkin Shakespeare bundle at a groundling-friendly price. The curtain falls on this promotion after April 23, so act quickly!

It often pays to listen to my coworkers.

While delivering some marked-up pages to our production team, our most experienced production artist, Alex Fernandez, asked me, "Why haven't you written Munchkin Clowns yet?"

"Because I'm stupid sometimes, Alex," I replied, and went back to my desk to make notes. Not much later, I had a 15-card expansion, almost all of which passed unchanged directly into layout. It doesn't often happen that painlessly, but it sure is fun when it does, and it seems to happen more often with these small expansions. Getting to take an idea and run with it like this is one of the best parts of my job!

I was incredibly pleased when Len Peralta agreed to illustrate this one. I knew we had lots of artists who would do a great job with this material, but I also knew Len would be able to make it recognizably Munchkin and also super duper creepy. He exceeded every expectation. Thanks, Len! 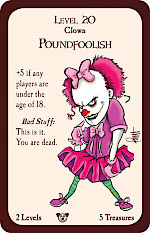 Here are a few thoughts on specific cards: