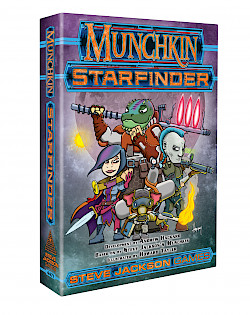 Thank you to all the 1,299 backers who pledged a total of $84,326 on Kickstarter to help bring Munchkin Starfinder to store shelves in 2018. We've been very happy to work with our friends at Paizo again on this project and we know they are as excited as we are about what's coming.

In case you missed it, here's what the "I Want It All" backers will be receiving:

We'll be opening up BackerKit in a couple of weeks for backers to finalize their orders and for anyone to preorder the game or add more swag to their pledges. You can even order one of the special I Want It All boxes and get everything listed above. Watch the Daily Illuminator or the Munchkin Starfinder Kickstarter itself to find out when the BackerKit is ready. If you miss this window, you'll have to wait until later in 2018 to buy the game.

On behalf of everyone at SJ Games, Paizo, Munchkin Starfinder artist Howard Tayler, and my friendly local coffee shop, let me thank you all again for the support you've shown. I know you won't be disappointed!