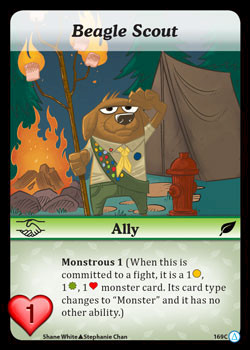 We've been working on the Munchkin Collectible Card Game for a couple of years now. It's involved a lot of playtesting, a series of conversations with the designers, and more than a few loud arguments friendly conversations behind closed doors. The goal is to have rules that are clear and concise, yet cover every possible question that might come up. This is, practically, impossible. With the first set of the Munchkin Collectible Card Game reaching 278 cards, we have had a lot of rules to go over, making sure that if something works one way on one card, it works that way on all the other similar cards. It's been a long, pedantic, and often frustrating process.

But it's worth it. I'd like to introduce you to my friend the Beagle Scout.

He's been through quite a few iterations. At his core, he's supposed to be an Ally, happy to throw himself in front of a monster that's attacking you. Unlike most of your Allies, he can also be played to fight for you. This changes his card type and his stats. As an Ally, he's only got Life. He doesn't have a gold cost or a Power value, which are important parts of a Monster. We need to explain this all as briefly as possible while still being clear, using only words we've included in the approved CCG lexicon.

The earliest version of this card read, "You may reveal Beagle Scout as a 1 cost, 1 Attack monster without cheating." This is not very clear. For one thing, it doesn't include a Life value. At this early point of development, monsters didn't actually have Life! Clearly, that changed. "Cheating" is a core concept within our game that we'll discuss in more detail later; for now, just know that we spelled out that you aren't cheating if you turn this guy over in combat because of a couple of rule problems he caused otherwise.

We updated the card a bit later: "Honest (If you are caught cheating with this card, take one additional damage.) You may reveal this card as a 0 gold, 1 power, 1 health monster."

In this version, we have introduced a keyword. If you are going to write a rule over and over again, on lots of different cards, it makes sense to attach it to a word or phrase that is explained in the reminder text inside the parentheses. This wording is better and now includes Health, which became Life when we decided that Life is just a better fit.

Even that still wasn't final. After a lot of tweaking, we wound up with what you see on the card above. That is a lot of words! But they're all necessary words. For instance, we realized we didn't need Honest in this set. It's a great ability that may come back in the future, but we didn't need it here and we're trying to eliminate as much redundancy as we can. While we very much want to keep the humor of Munchkin, first and foremost we have to deliver a great game.

We have a lot of rules written around what makes a Monster card: what they can and can't do, how they're played, and how they're handled. The simple solution here is to make this card change types! It's something we're going to do many more times, so making it a keyword makes sense. The word or phrase we choose should be shorter than the reminder text (otherwise, don't keyword it) and it should be relevant to the ability itself. This ability turns a non-Monster card into a Monster, so Monstrous was chosen. And because we wanted to have different levels of the trait, we decided it would be Monstrous X. In technical terms, it looks like this:

Monstrous X (When this is committed to a fight, it is a X gold, X power, X life monster card. Its card type changes to "Monster" and it has no other ability.)

This card is just Monstrous 1, but other cards can be Monstrous 2 or even Monstrous 3, playable as a 3 cost Monster with 3 Power and 3 Life!

And that's just one card. We've done this 277 more times!

We've been pretty quiet about this game as we complete some important, necessary work under the hood. There are still quite a few steps between completing the card text and rules to putting games on retail shelves, but most of the hard editorial and development work is done. The Munchkin CCG is picking up speed on its way to the shelves at your local game store!