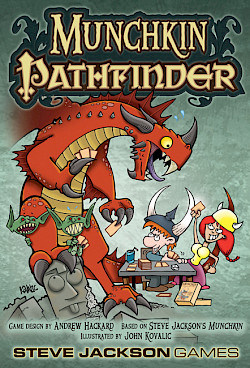 Writing a new Munchkin game starts with finding the right theme; once that's done, the stupid jokes follow. A licensed Munchkin game such as Munchkin Pathfinder is both easier and harder:

Munchkin Pathfinder was a particular design challenge because it's such a rich setting. The challenge was figuring out what to leave out, not what to include. As I've told writer friends, "If you put all your best stuff into the first book, you don't have anything first-class left for the second." Translate that to games and expansions, and you have our reason for leaving some classic Pathfinder out of the Munchkin Pathfinder core set. We also made some room for some stupid fantasy card ideas in need of a home, which helped make the game more accessible to non-Pathfinder fans.

(I have to pause here to note that Paizo has been wonderful to work with. They fully supported the game from the start, and were happy to answer all of my dumb questions: "Is it OK to use a goblin as one of the monsters?" was an early one. Thanks for being awesome, Paizo gang!)

Enough might-have-beens; let's talk about what did get included! 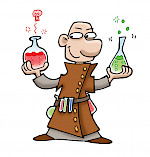 Early on, we made the decision to create new Classes rather than use the same set of Cleric, Thief, Warrior, and Wizard we had used in the other fantasy sets. Pathfinder has a great assortment of new classes, and this was a chance to make the game more familiar to the Pathfinder audience and give our hardcore Munchkin fans new cards to play with.

We originally planned to create new Pathfinder-specific Races, too, but it turns out Pathfinder had a better option: setting-specific Factions that PCs are encouraged to join. We picked four to use in the base Munchkin Pathfinder game, and there are plenty more to choose from when we get around to writing expansions.

Weapons and other treasures were sometimes challenging. The Pathfinder setting does not lack for very cool items, but many of them don't lend themselves to funny jokes about them; the coolness is in the backstory, which doesn't fit on a small card very easily. We grabbed some iconic treasures from Pathfinder and mixed them with our own demented imaginings. The result seems to work!

Monsters were less challenging than we thought; once we came up with the idea that goblins could be low-Level swarming monsters, it was just a matter of coming up with enough goblin jokes. (Obviously, we didn't have a problem, since we also published a booster, Gobsmacked!, that was mostly more goblin jokes -- and still had a couple left over for promo cards!) We pulled several of the nastiest monsters out of Pathfinder, too, causing some of our Pathfinder-savvy friends to wince when they saw them. Score!

Many of the Curses in Munchkin Pathfinder are diseases found in the setting. (My thanks to the contributors to for doing so much of my research for me, here and elsewhere!) Pathfinder has some really nasty diseases, and it was a pleasure, albeit a creepy one, to see John bring them to life in his art.

There are many more surprises in Munchkin Pathfinder than we could discuss in an article twice this size. We hope this gives you a taste of some of the design decisions we made over the development of the game!